As you enter the hallway and climb the stairs, notice that the banister has been shortened and patched.  That was done in 1949, when the plumbing and heating system were installed and the landing was built.  Tall visitors have to duck to avoid hitting their heads on the projection that was made when the full bathroom was put in on the second floor.  The bathroom originally was fitted with a tub, but in her later years Lee suffered from arthritis and couldn’t manage the tub, so she had a shower installed in the 1970s.  The antique pedestal sink is one of her finds from Manhattan--reportedly it was being thrown out during renovation of an apartment building in her neighborhood.

After Jackson's death, Lee spent winters in the city, where she eventually settled in an apartment on East 79th Street.  But she continued to spend summers here, and created many of her most important paintings and collages in the barn studio.

In the upstairs hall, master bedroom and studio, the floors are covered with the Masonite game boards that were also used in the barn studio.  Here you can see that, when painted, they make an attractive and practical floor surface.  Prints and photographs from the museum’s collection are on display in the hall.

The guest bedroom at the front of the house is furnished as it was in the 1970s, when Lee was living here on her own. The two matching brass beds were originally hers and Jackson’s. She said they slept in twin beds because they had very different schedules. He was a late sleeper, and she didn’t like to disturb him in the mornings. After he died, she moved the twin beds into the guest room and bought a double bed for herself.

The sunny master bedroom remains much as Lee left it.  It contains her double bed, which replaced the twin beds she and Jackson used, a shell collection on glass shelves under the south windows, and numerous personal possessions, including an oak shelf unit holding several shell-covered souvenirs, and other objects she collected.  The imposing “cheval glass” dressing mirror on wheels and the intricately woven wicker Boston rocker also date from the 19th century. Next to the mirror is a dress that was custom made for Lee to wear to a reception at the Museum of Modern Art in 1967, when the museum presented a major Pollock retrospective exhibition. 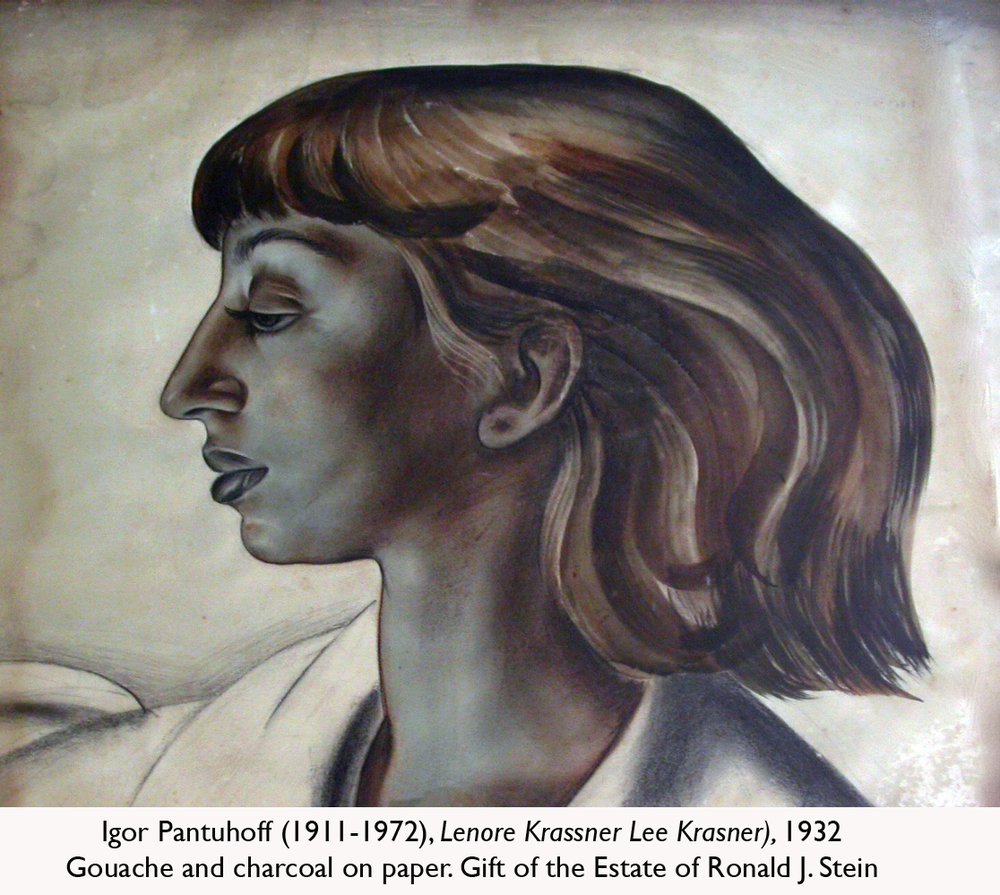 The profile portrait of Lee was painted in 1932 by Igor Pantuhoff, who lived with her during the 1930s.  They met at the National Academy of Design, where they began a 9-year relationship; in fact, Lee’s family and friends thought they were married.  Pantuhoff, a handsome White Russian émigré, became a professional portrait painter.  Here he has emphasized Lee’s exotic qualities, and brushed in the color of her beautiful auburn hair.  A copy of this painting, but with the actress Marcia Gay Harden’s features, appears in Lee’s studio in the “Pollock” movie.

The smallest of the three rooms on this floor is the original studio, used first by Jackson during the winter and spring of 1945-46 and then by Lee, who worked here for about ten years.  People often remark on how small the room is, but its steady north light makes it the best choice for a painting space.  The back window looks out on Accabonac Creek, and the first paintings Jackson made here are called the Accabonac Creek series.  They’re not actual pictures of the creek, but they have a feeling of openness and light that wasn’t in the paintings he did in the city. 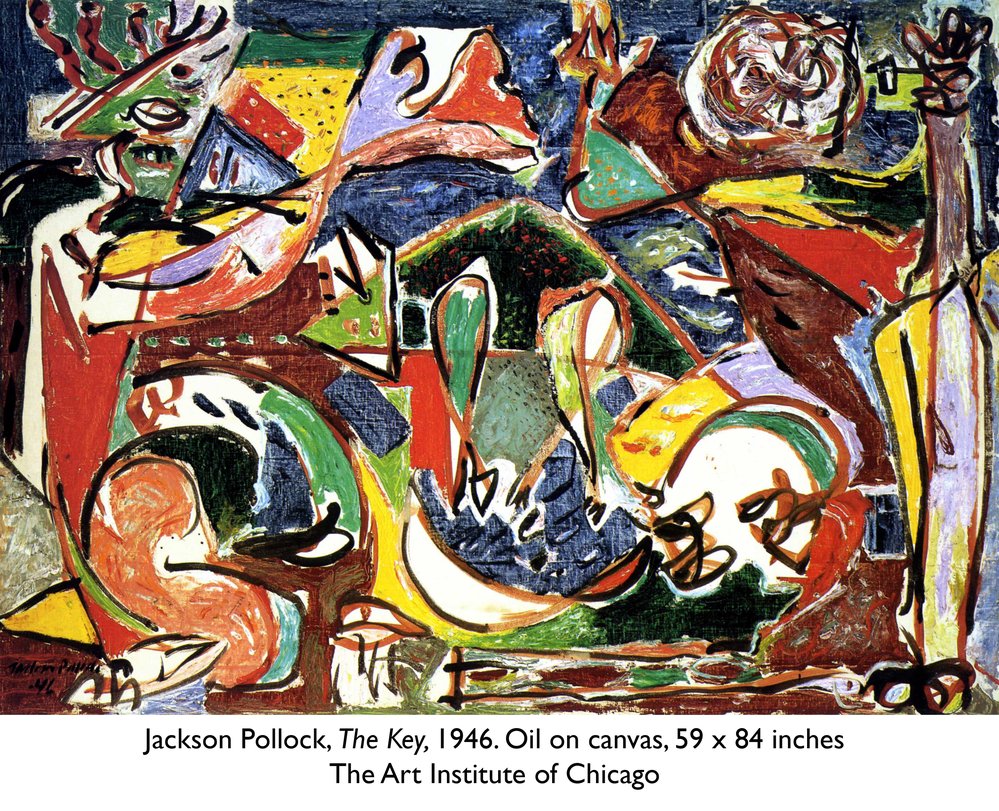 It was in this room, according to Lee, that Jackson first placed a canvas on the floor.  The paintings Jackson made in this studio, his Accabonac Creek and Sounds in the Grass series, use conventional techniques, but they point the way towards the breakthrough that would come with his move to the barn in late 1946.

A 1950 photograph by Hans Namuth shows what the room looked like when Lee was painting here.  The room had heat by that time, but it was kind of rough--a clip-on lamp is stuck into a hole in the plaster wall.  The work in progress on the easel is one of her so-called personage paintings, most of which were later reworked.  Many of her earlier Little Image paintings were also done in this room, as were the stunning collages of 1953-55 that marked a major turning point in her development. 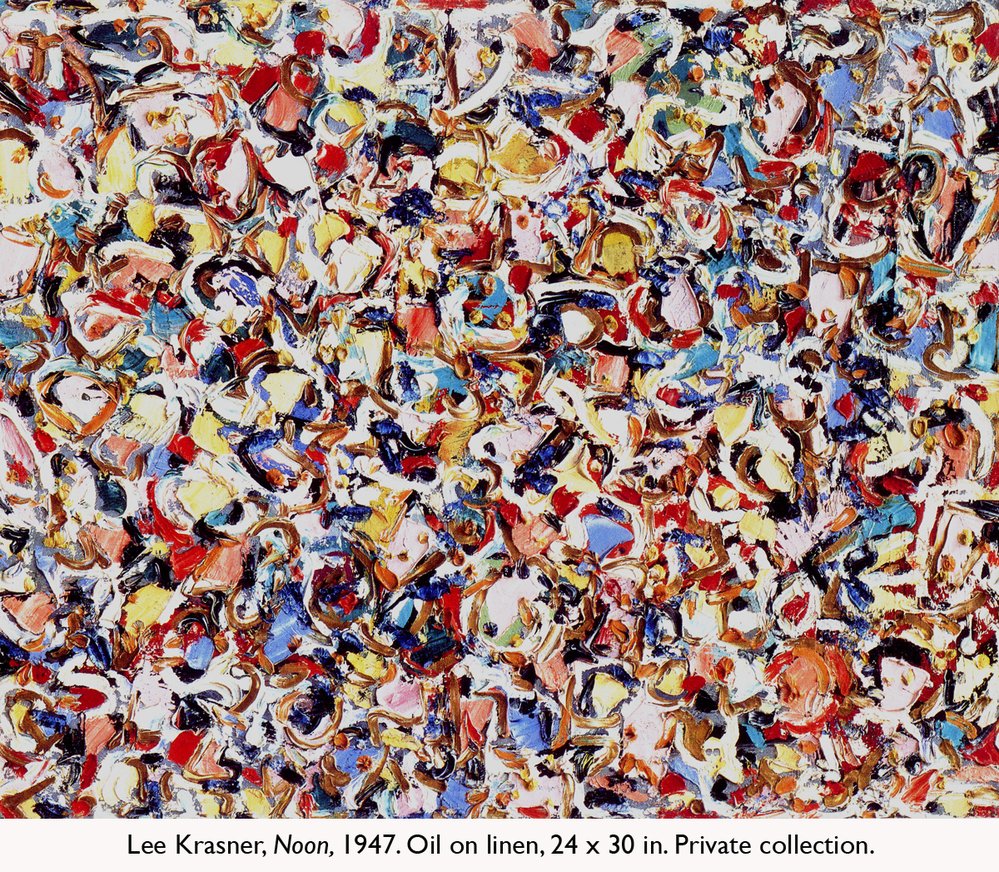 After Jackson's death, Lee worked in the barn studio and converted this space into a guest room and office.  It still contains her furnishings, including a blonde wood desk and matching shelf units with louvered doors, and a painted Victorian chest of drawers.  Also on display here are selections from the museum's collection of prints, including engravings and drypoints from Jackson's 1944-45 series made at Atelier 17, Stanley William Hayter's experimental print workshop in Manhattan, and a poster of Lee's 1953 painting, "Blue and Black," which was painted in this room.

We hope you’ve enjoyed your audio tour of the Pollock-Krasner House and Study Center.  You’re welcome to spend as much time as you like looking around the property or viewing the exhibition downstairs.

In addition to preserving and interpreting the artists' home and studio, the museum offers a program of lectures, school and group tour visits, and special events that focus on the history of 20th century American art and the development of eastern Long Island's world-renowned artists' community.  A schedule of activities is available on request, or visit our web site at pkhouse.org.

This audio tour was produced by Ovid, with support from the Research Foundation of Stony Brook University.