Judging from the outside, you might have expected the ground floor to be divided up into rooms.  Originally there were four rooms on this floor, but Jackson and Lee removed the interior walls and doors to turn the space into one big room.  They covered a window and door in the outside walls and painted the room white, including the floor.  Their paintings looked very striking on the clean white walls, and the open space was great for entertaining.

All the furniture and decorative objects in the house were here when Lee died  in 1984, but not all of them were around in Jackson’s time.  In the kitchen area, you’ll see a few that were.  The oak cupboard next to the window--an English antique from the late 17th or early 18th century, and the Spanish oak sideboard from the same period that’s used as the kitchen counter--were given to them by friends not long after they moved in.  They brought very little furniture from the city.  In fact, the only items we know came out with them are an elliptical mirror and the cast iron garden bench that’s now on the back porch.  It was in Lee’s New York apartment before she moved in with Jackson. 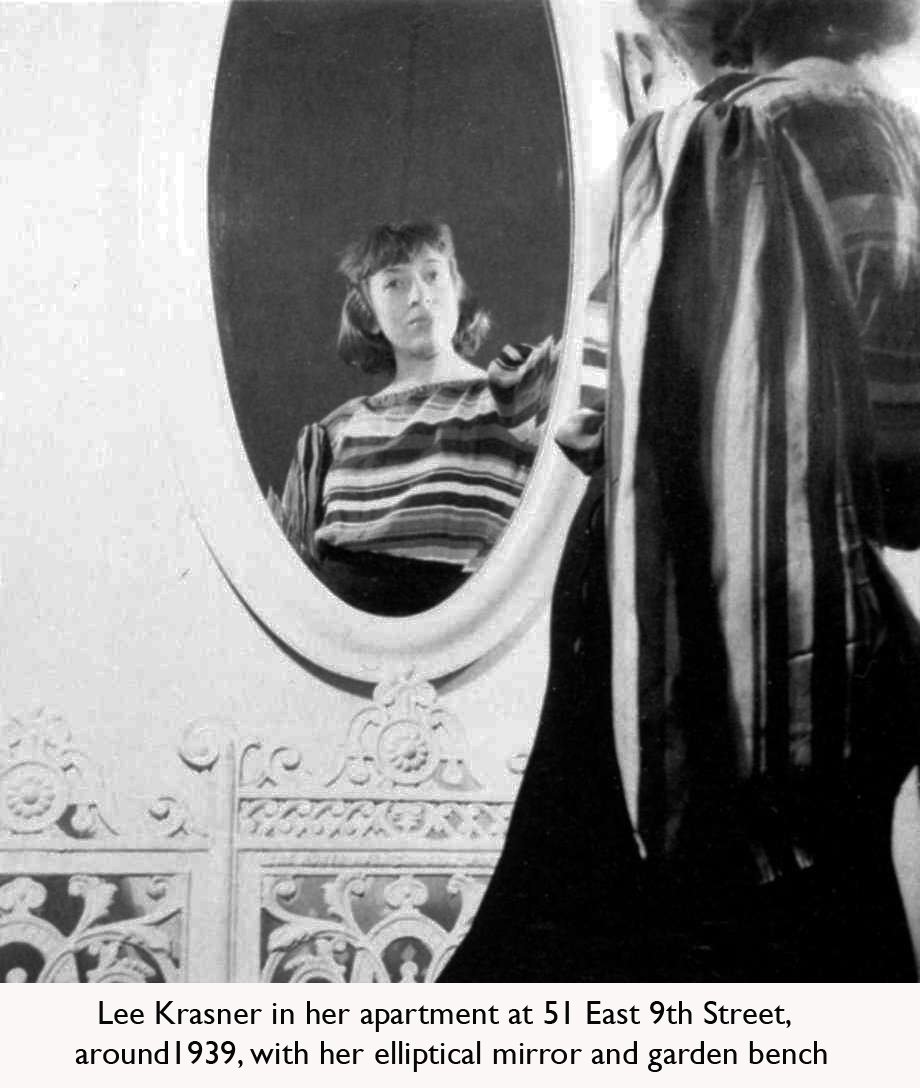 Hanging on the wall over the fridge, which Lee bought in the late 1960s, is a large fish print that she and some friends made on the counter using a Japanese method called gyotaku.  The fish, a locally-caught tarpon, was covered with ink, then rice paper was laid over it and rubbed to bring up the details.  Then the print was pasted down on wallboard.  After that, Lee and her friends probably cut up the fish and cooked it.

On the other side of the fridge is a plaque made of painted plaster, a cast of the decoration from the Carson, Pirie Scott building in Chicago.  It was a gift from their friend, the architect and sculptor Tony Smith, a close friend of Jackson’s who visited here often.  The gas stove was probably here while Jackson was alive, although when they first moved in they had to cook on an old coal stove that also heated their water.  They didn’t get full plumbing and central heating in the house until late 1949, four years after they arrived.  Until then, they made do with a makeshift bathroom that Jackson had built on the back porch, and is now used as a pantry and cloakroom.  After he died, Lee bought the Victorian furniture you see in the house today, including the ornate Gothic Revival hexagonal table here in the kitchen.  The TV monitor sitting on the 19th century marble-topped washstand is obviously new--we use it to screen our large collection of oral history tapes and videos on modern art. 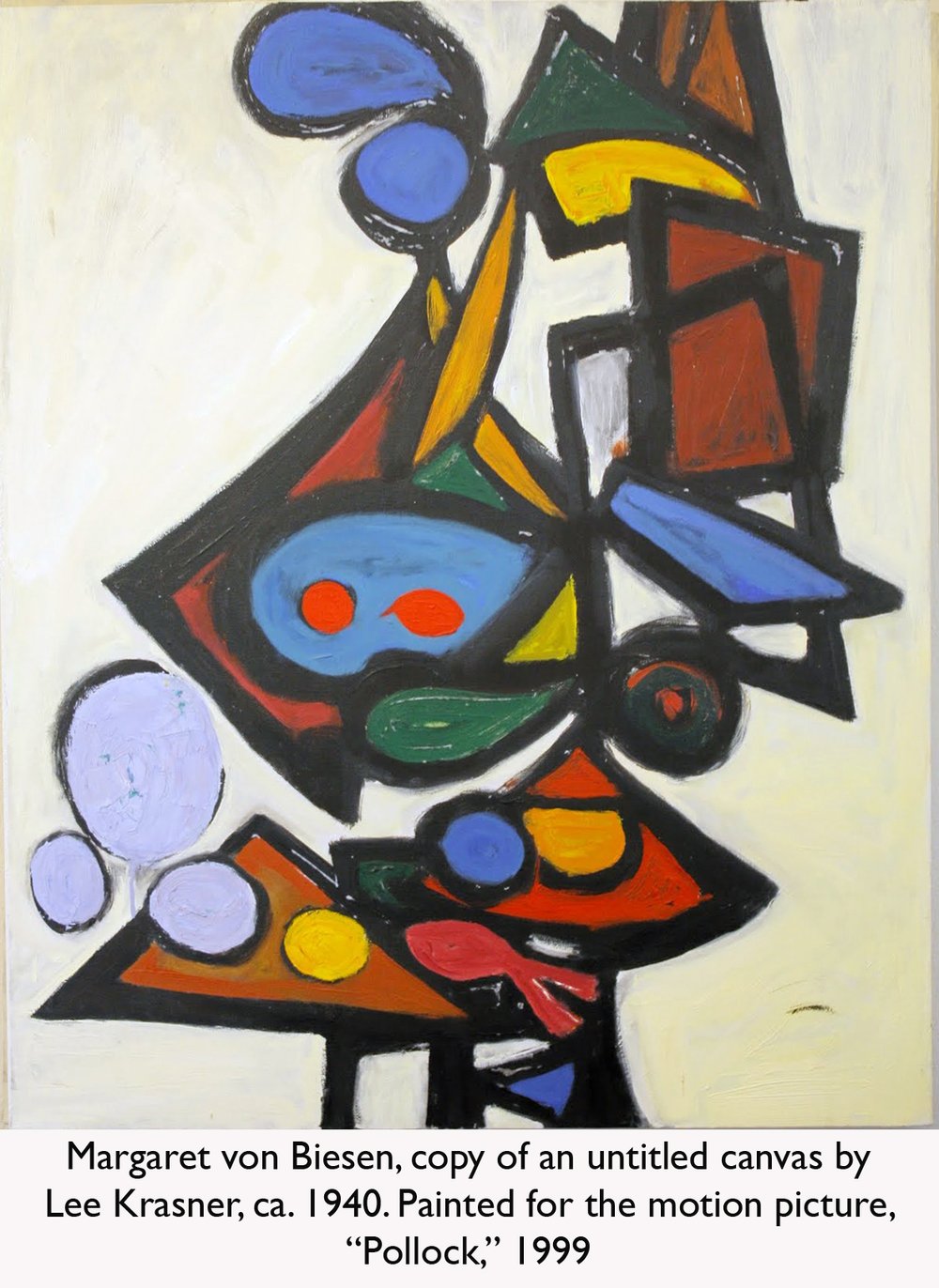 The colorful abstract still life by the window illustrates Lee’s late 1930s cubist style, but she didn’t paint this canvas.  It’s a prop from the “Pollock” movie.  Marcia Gay Harden played Lee, and won an Academy Award for the role.  The film company made more than 150 replicas of actual paintings by both artists, and this is one of them.

Above the oak cupboard is a small original painting by Jackson, dating from the late 1930s.  It strongly reflects the influence of José Clemente Orozco, one of the leaders of the Mexican mural movement.  Orozco came to New York in the late 1920s and painted frescoes in the New School for Social Research, where Jackson watched him at work in 1930-31.  He also saw Orozco’s frescoes at Dartmouth College in New Hampshire. 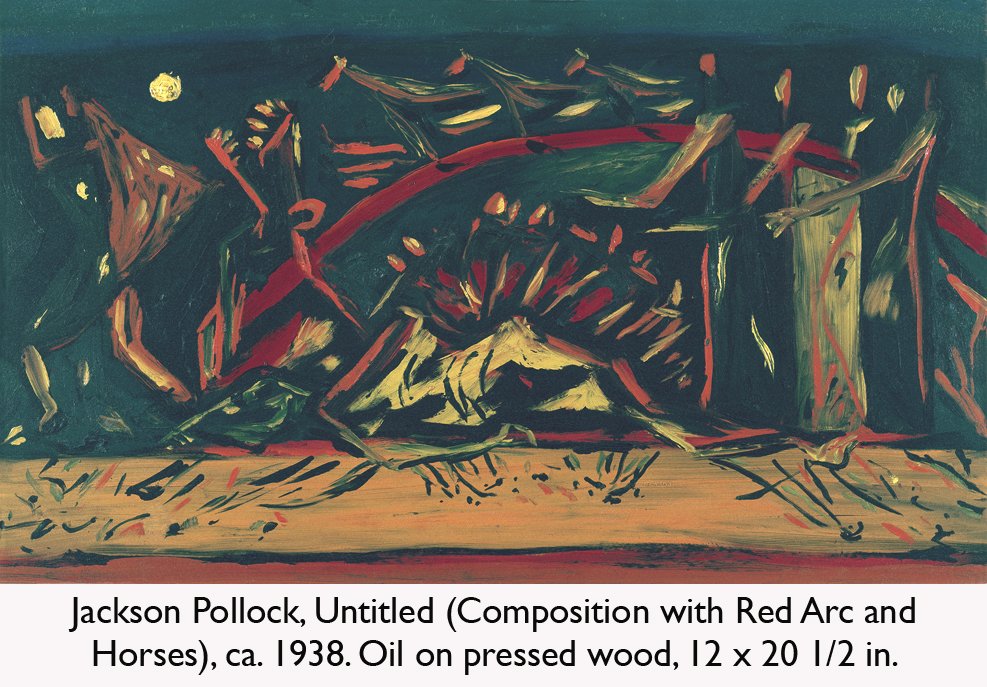 Jackson’s painting is tiny compared to an Orozco mural, but it contains similar expressionistic brushwork and symbolic forms, as well as references to Native American ritual figures.  Toward the left center, a screaming horse’s head suggests that Jackson was familiar with Picasso’s famous mural, "Guernica," which was painted in 1937 and widely reproduced before coming to New York two years later, when all the artists flocked to see it.  At this point in his development, Jackson was still synthesizing those influences, but the qualities that become important in his later poured paintings--the emotional intensity, the abstract symbolism, the deeply personal way he communicated his ideas--are all here in this transitional work.

As we move into the living-dining area, the only item still here from Jackson’s time is the rusted anchor with its hooks broken off, hanging on the wall to your left.  Jackson and Lee found it on a local beach and dragged it home to serve as a decoration.  They both enjoyed beachcombing and collected rocks, shells, bones, driftwood, and other found objects.  Sometimes their finds were incorporated as collage elements in their art.  In the bay window recess, Lee installed hanging plants and a metal tray to hold her collection of intriguing finds, including a large dried gourd, dried starfish and glass fishing net floats. 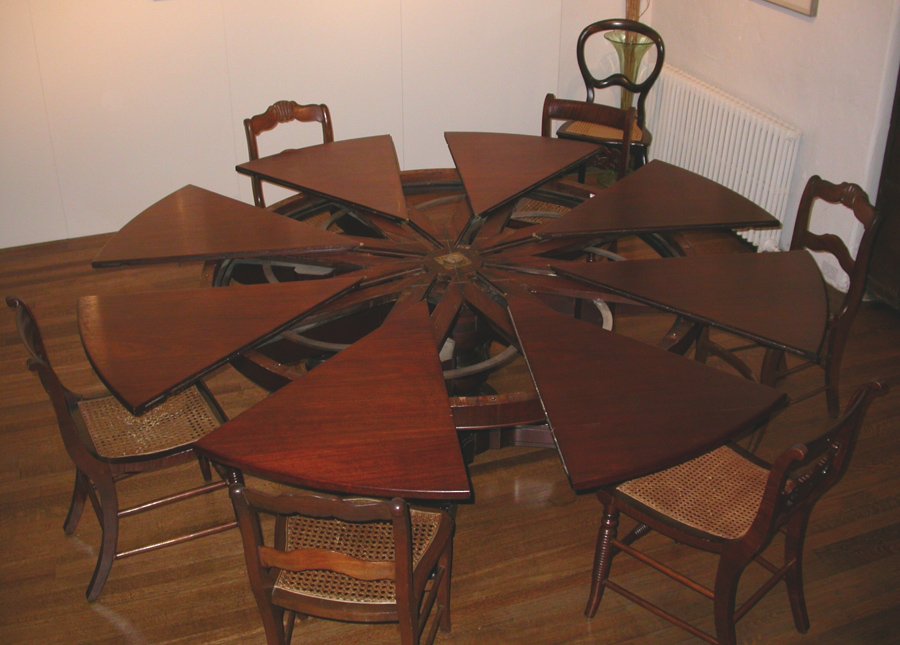 This area, where the couple relaxed and entertained friends, is now dominated by a magnificent round mahogany dining table.  It’s a mechanical table, made in London in the mid 19th century, with hinges attached to the wedge-shaped leaves.  When the straight leaves are removed, the top can be contracted, reducing the table's size and changing its shape to a rounded octagon.  Lee bought it in about 1958 from a second-hand furniture dealer in Southampton.  It was found for her by friends, the artists Sheridan and Cile Lord, to whom she gave the Mission-style oak dining table that was here during Jackson's lifetime.  On the oak cupboard is a photograph of the room with that table in place.

In 1968, Lee acquired the impressive white sculpture made of painted wooden balusters, bed posts, and other found objects.  It was created by her nephew, Ronald Stein, for an exhibition, "Fountains by Eleven Sculptors," that he organized for the local art center, Guild Hall.  Notice the metal water spouts sticking out of the top.  After the exhibition, Lee had the plumbing removed and mounted the piece on a rolling base so it can be moved around the room.  Its title, "Abraxas," refers to a principle of the Gnostic religious hierarchy, in which a supreme god reigns over 365 dependent deities.

The museum presents temporary exhibitions of work by other 20th century artists.  The current exhibition is identified by wall labels and a brochure. After your audio tour is over, please go back and see it at your own pace.

The front parlor contains Jackson and Lee's books and exhibition catalogues, some of which are inscribed to them.  Please don’t touch them, or the record collection, which includes many 78 RPM discs and several early extended-play records, as well as long-playing records from the 1960s and 70s.  Their hi-fi set, installed about 1954, is cleverly wired to speakers under the stairs in the living-dining area.  By the way, it still works.  People often assume that Jackson was a fan of bebop and progressive jazz, and that he listened to music while he painted.  Neither is true.  He had no record player or radio in the studio, and he loved Dixieland jazz, ragtime music, folk songs and ballads. Lee’s taste was more avant-garde--the Modern Jazz Quartet, Miles Davis and Thelonious Monk albums were hers. 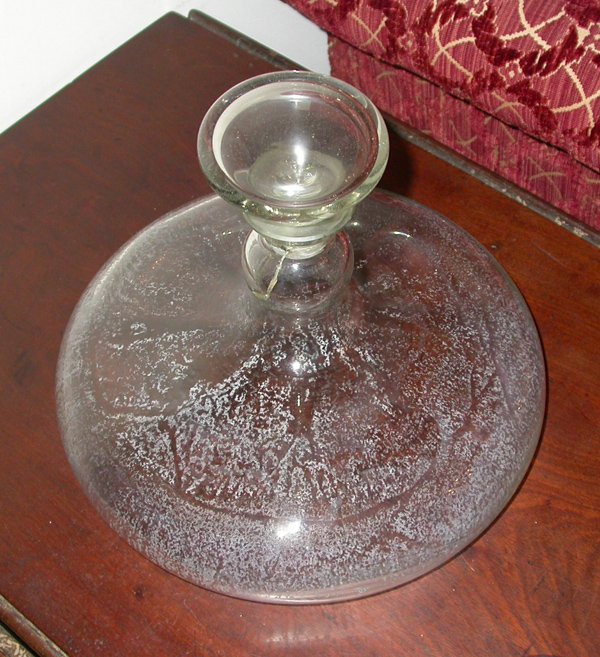 On the small mahogany drop-leaf table is an interesting ship’s decanter, so-called because of the wide base designed to keep it from spilling on a rolling ship.  Note that the glass is discolored by a snowflake-like pattern, which Jackson and Lee found attractive.  One evening, when their friends the Lords came to dinner, they admired the decanter and Jackson impulsively gave it to them.  It was returned to the house by Mr. Lord’s family.