If you’ll find a comfortable place to stand or sit for a few minutes, I’ll tell you something about the artists and how they came to live and work here.  Then we’ll go into the studio, and then the house.

As you look east toward the creek, try to imagine the view without any of the trees or bushes that have grown up naturally since 1945, when Jackson and Lee moved here.   That open vista, and the peaceful surroundings in this rural community of Springs, were powerful attractions to the couple, who had spent their adult lives in New York City.  Jackson was born in Cody, Wyoming in 1912, and grew up in Arizona and California, but in 1930, at the age of 18, he moved to Manhattan to study with Thomas Hart Benton at the Art Students League.  Lee was a Brooklyn native, born in 1908--she was a little over three years older than Jackson.  She also left home as a teenager to study art in Manhattan, at the Cooper Union and the National Academy of Design.

During the Great Depression of the 1930s, both she and Jackson worked for the Works Progress Administration, or WPA, a remarkably enlightened federal jobs program. 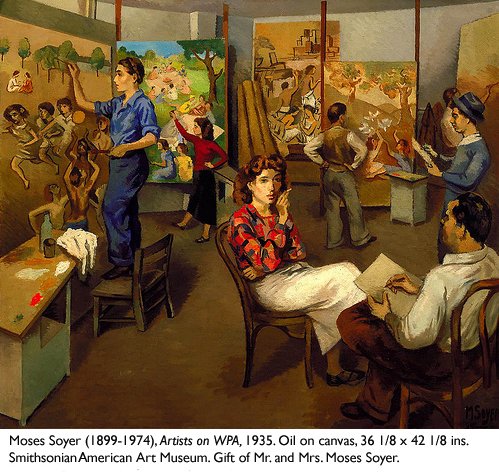 At that time, 25% of the nation’s workforce was unemployed. The WPA was designed to put them back to work.  It hired people to build parks and roads and all kinds of public works, but it also hired artists, writers, actors, and musicians to do creative work.  This program lasted from 1935 until 1943, and it gave thousands of artists a living wage and the freedom to develop without worrying about selling their art, because the government was buying it. 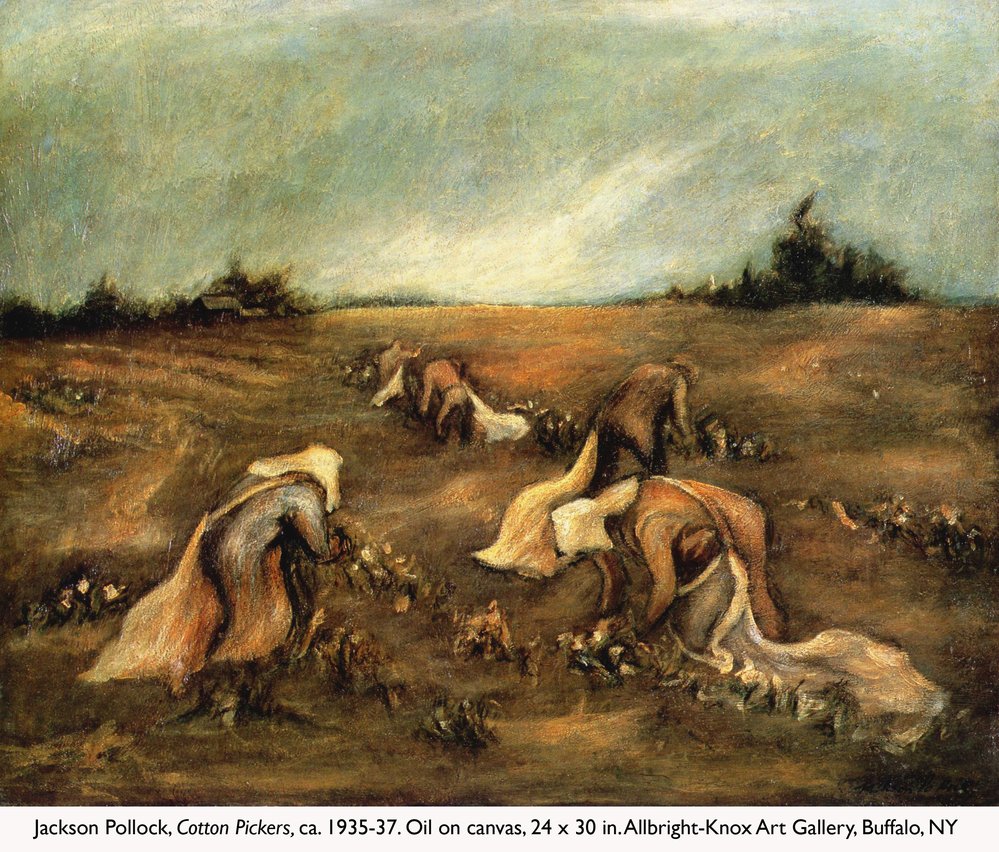 At first Jackson was working in the style of his former teacher, Benton, who painted scenes of the American West.  But while Benton’s subject matter was home-grown, his theories of form and composition came from the European Old Masters, and he encouraged his classes to study them.  Jackson worked hard to learn the basics, but there was always a very personal and expressive quality to his art, so even his American Scene paintings had turbulent emotional undertones.

Lee’s early paintings were more traditional, but she soon became interested in modern art.  After she graduated from the academy, she experimented with surrealism and geometric abstraction, and later went back to school to study with Hans Hofmann, a German teacher who came to New York in the early 1930s. 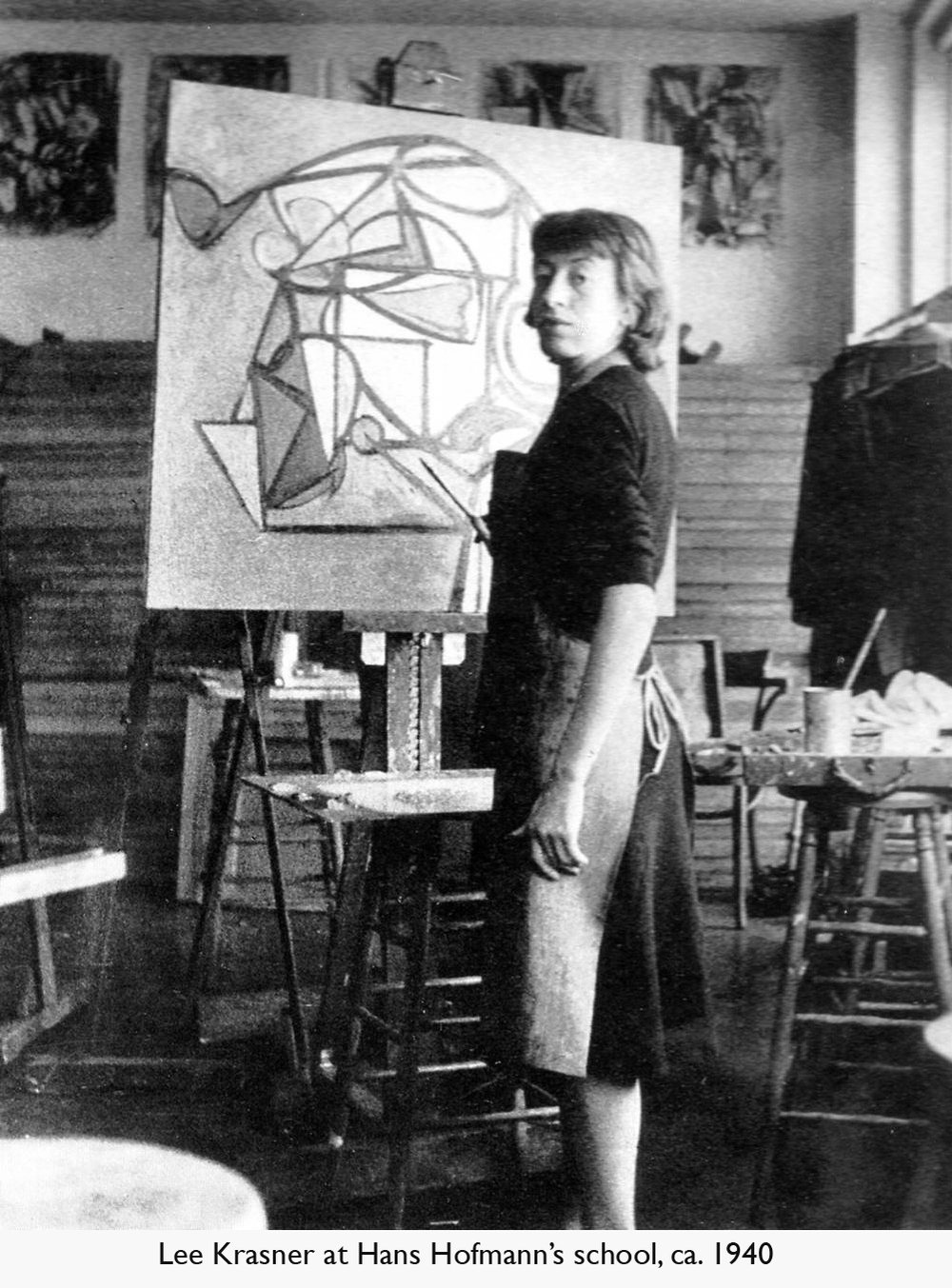 Hofmann taught the principles of cubism, and Lee became a devoted cubist.  She painted a lot of still lifes, with flat colors and abstracted forms--everything reduced to essentials.  She joined the American Abstract Artists, a group who believed that Americans working in advanced styles deserved just as much attention as their European counterparts, and she became known as one of the most accomplished young modernists in New York.  In 1939 she was promoted to senior artist on the WPA.

But the WPA was under attack by conservatives who thought it was a waste of taxpayers’ money and a hotbed of radical thinking.  After the United States entered World War Two in December 1941, WPA artists were assigned to making posters and displays for the war effort.  Lee supervised one of those projects, and Jackson worked on it with her.  They had first met a few years earlier at a party, but didn’t get to know each other until 1941, when they were both invited to be in an exhibition of modern French and American painting.  When Lee first visited Jackson’s studio that November, she was amazed by the power of his work.

He was one block away from me, between University and Broadway. I promptly hoofed over there--it was a five flights up affair--and I tried the door, and someone opened it, and that was Jackson Pollock. And I said, I’m in the Graham show, so we introduced ourselves. This was his studio that I walked into, and he said, come in, and I certainly did, and I saw what was around the room. I felt the presence of a living force that I hadn’t witnessed before, and expressed it. 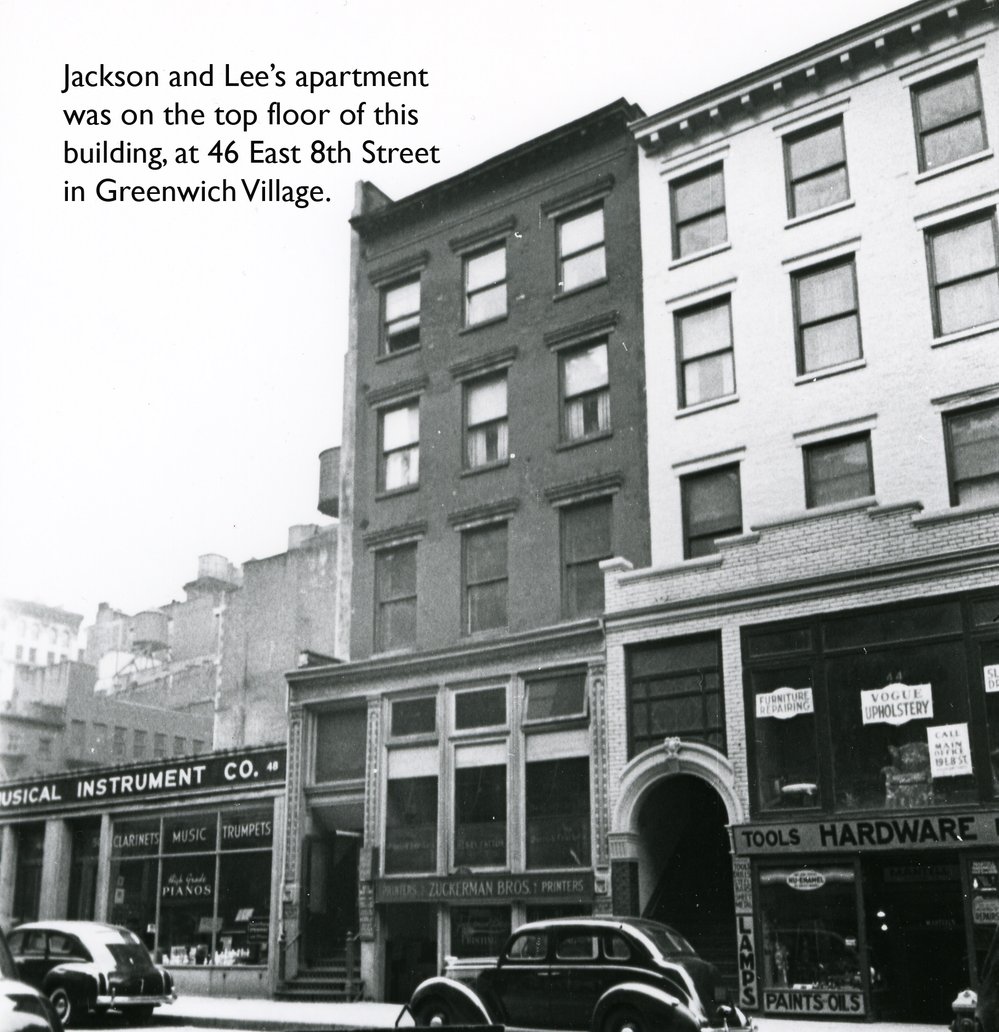 The two artists fell in love, and decided to live together in Jackson’s apartment on East 8th Street in Greenwich Village.  Jackson’s dynamic, emotional art had a profound effect on Lee--it made her realize that her own work was too tied up in theory and not spontaneous enough.  She also realized that Jackson needed a lot of help to manage his life.  He had been an alcoholic since he was a teenager, and went on binges that kept him from working.  He also had mood swings, and had been getting psychiatric treatment on and off for several years.

So while Lee was struggling to find direction in her work, she was also dealing with Jackson’s problems and trying to promote his work.  But she was strong-willed and devoted to him.  She believed he was a genius, and she did her best to get important people in the art world to agree with her.  Her promotion paid off when Jackson was taken on by the eccentric art collector, dealer and patron Peggy Guggenheim, who gave him his first solo exhibition in 1943, and paid him a monthly allowance.  Thanks to Lee’s advocacy and Peggy’s support, people were talking about this remarkable newcomer and his challenging abstract art, full of agitated forms and cryptic symbols. 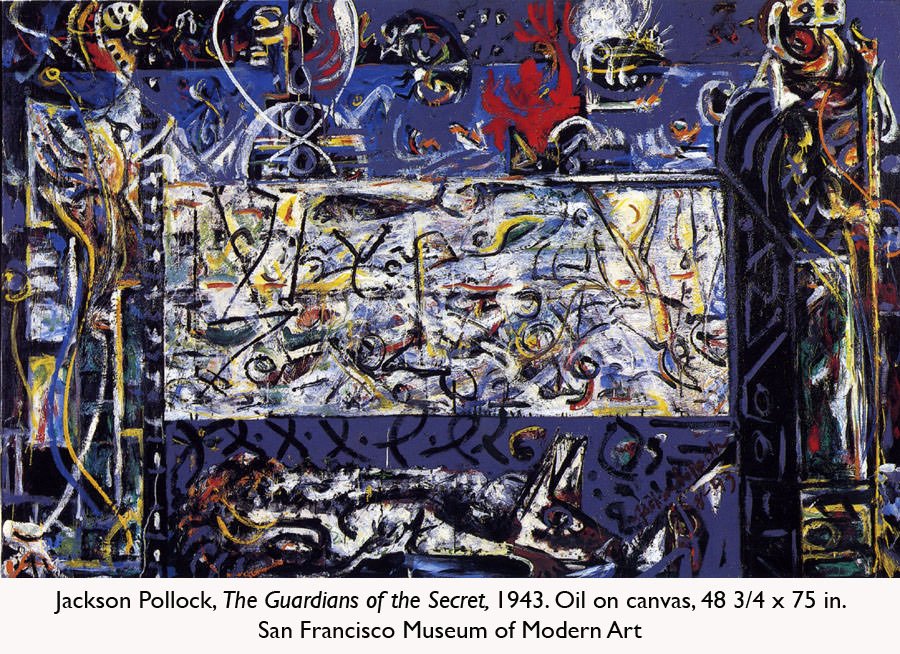 But the more attention people paid to Jackson, the harder he found it to stay sober and focused on his work.  Without the WPA, artists had to compete for dealers, sales and press coverage.  The New York art world was now a marketplace.  It seemed like a pressure cooker to Jackson, who described it as brutal, and he always tried to get away, at least for the summer.  He and Lee spent the summer of 1945 with their friends, the artist Reuben Kadish and his wife Barbara, in a cottage on Louse Point, at the mouth of Accabonac Harbor.  If there were no trees and bushes in the way, you could see the cottage from here.  Artists had been coming out to the East End since the late 19th century, but not to this out-of-the-way hamlet of Springs, population 300, mostly farmers and fishermen.  Jackson and Lee hardly knew a soul in the area, but they decided to get married, move out of the city and settle down in Springs, where Lee hoped Jackson could concentrate on his work, but still be close enough to the city to go back and forth when he needed to.

That fall they came out house-hunting and found this property for rent, with an option to buy. 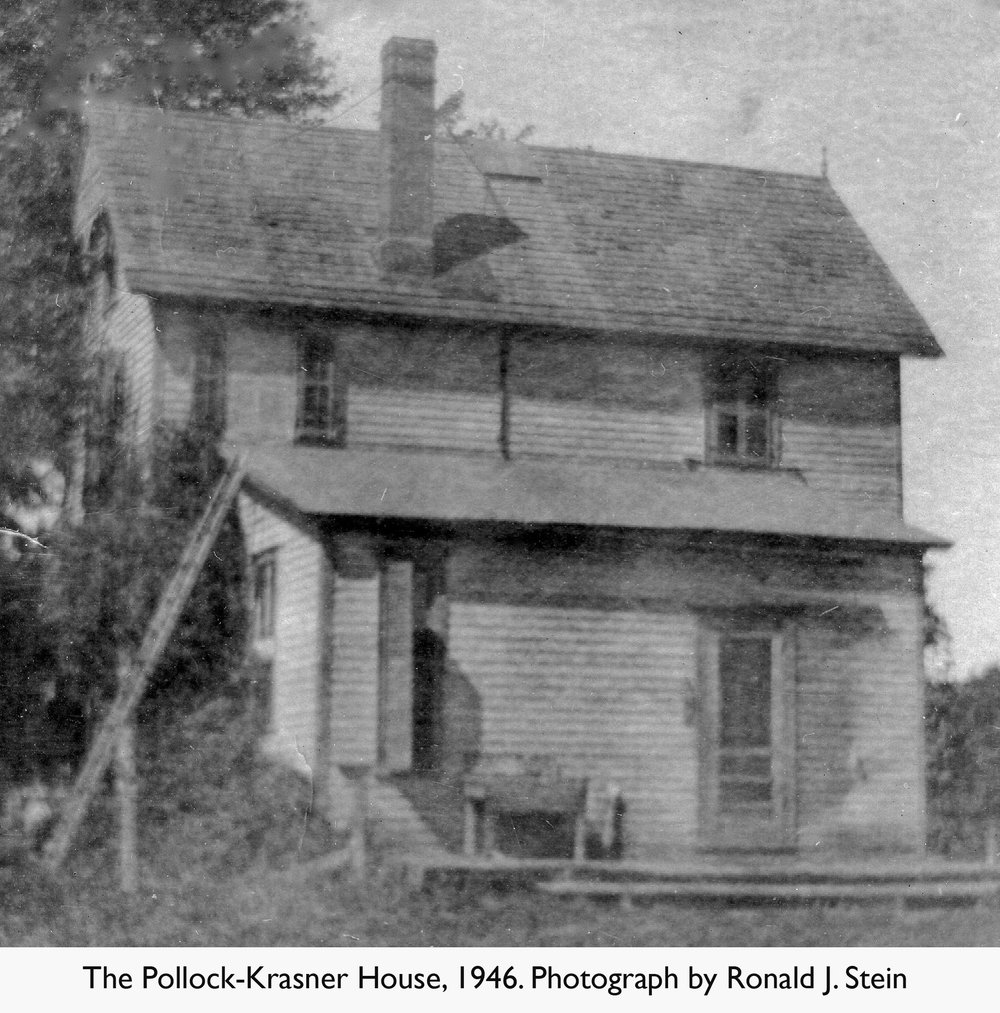 It had a great location on the water, and a small barn that would make a fine studio.  The price was $5,000, which was a lot of money in those days, especially since they were broke.  To finance the purchase they borrowed the $2,000 down payment from Peggy Guggenheim, who also continued Jackson’s monthly allowance.  In return, he owed her all his work, although he was entitled to keep one painting a year for himself.  The deal gave Jackson a home of his own, a small but steady income, and freedom from what he called the city’s wear and tear.  In return, Peggy boosted Jackson’s career by selling his work to get her money back on the investment.  The contract was in effect through 1947, when Peggy closed her gallery and left for Europe.

In Ed Harris’s Oscar-winning motion picture, “Pollock,” which was partly shot on location here, there’s a scene in which Jackson and Lee move to the house during a rainstorm and have to break in because they’ve lost the key.  That’s pretty much the way it happened, according to Lee, who also remembered that, with no hot water and only coal stoves for heat, the place was a far cry from their New York apartment.

Well, when we first moved out in ’45 it was, uh, let’s see, how can I describe it? I don’t know how to describe it, it was hell, to put it mildly, for me. For instance, it was during the war period, so that you couldn’t get a supply of fuel. Cold water, no hot water, no bathroom. No, it was a rough scene, it isn’t like what most artists know today. 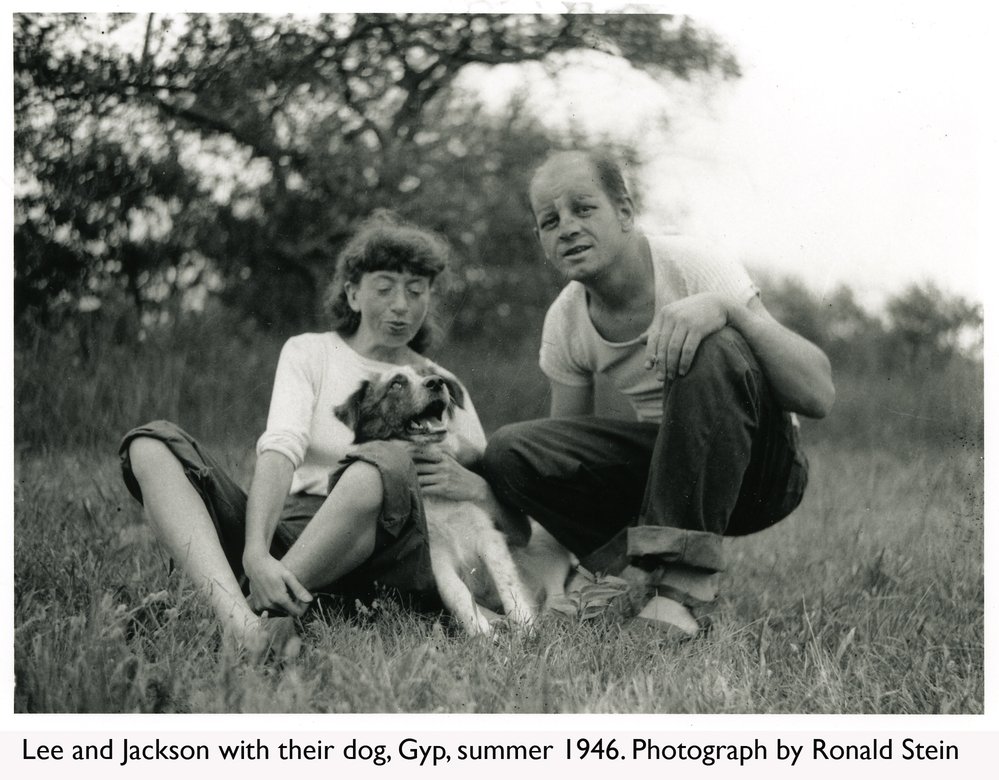 But they were determined to make a go of it.  Lee staked out a work area near the living room stove, and Jackson took over a small upstairs bedroom as a studio.  In the spring, they started to convert the barn, which was built to store fishing equipment.  You can still see its original concrete floor on the lawn behind the house.  First they had it moved about twenty-five yards to the north, opening up the water view.  A wood floor and a large north window were put in, but there was no heating or electric light until 1953, when Jackson had the building renovated again.  So the barn was his studio for roughly ten years, from 1946 until he died in 1956.  After his death, Lee used it until she died in 1984.  Let’s go have a look at it.